Supply chain congestion: The pandemic and beyond

Initiated by the pandemic, pressure on the current global supply chain is likely to continue for the near to-mid-term, providing opportunities and risks for liner operators, and challenges for cargo owners

The COVID-19 pandemic has not only exacerbated long-standing shortfalls in the global supply chain, but it has also created new pressure points, including crew quarantines, local port shutdowns, and labour shortages. During the spring and summer of 2020, while ports mostly remained open to support continuing supply of essential goods, non-essential trades were actively deferred. At the time, given the uncertainty of the pandemic’s impact upon economic demand, as of March 2020, container sector analysts were forecasting a global decline in containerised cargo volumes of about 10% year-on-year for the full year. It was in this context that, by July 2020, as initial lockdowns were lifted, circa 9% of the global container fleet capacity (in excess of 300 vessels) had been idled. As pent-up demand drove global growth, there was a rapid readjustment of liner capacity as vessels quickly rejoined their former trade routes.

To deal with the economic fallout, governments across the globe embarked on fiscal stimulus programmes that fuelled a resurgence in demand for commodities and consumer goods. Instead of the originally forecasted global decline, containerised cargo volumes decreased by just over 1% in 2020 compared to the year earlier. Despite the continued growth of the container fleet, the lack of demolition activity and the current size of the orderbook, the demand momentum has continued throughout 2021 and is estimated to surpass pre-pandemic levels. Year-on-year growth in containerised cargo volumes for 2021 is forecasted to be around 6%, which equates to 5% growth when compared to 2019 levels. Changes in consumption patterns during the pandemic have led to a significant growth in e-commerce. In the United States, headhaul transpacific year-on-year containerised cargo volumes are expected to be up by around 28% (or an additional 3m TEU) for 2021.

Despite the previously idled services re-commencing under the major liner alliances, the upgrading of services with larger tonnage, the temporary movement of larger vessels from other trade lanes, the many “extra-loaders” deployed by some operators, and the new entrants to some routes (particularly the transpacific), ships have continued to sail at 100% utilisation, with cargo often left on the quay. The driver of this has been general port congestion, which according to industry research in August 2021, was estimated to have removed about 12.5% of global operational capacity due to inefficiency and general delays.

Over the last 12 months, scrutiny shows that the supply chain issues associated with port congestion are predominantly linked to the United Sates. The fact that the average size of vessels calling at the San Pedro Bay ports of Los Angeles and Long Beach (LA/LB) has considerably increased in the last decade to over 8,000 TEU capacity (and for some services up to 14,000 TEU capacity), means that total exchanges of containers per port call have also increased considerably. With limited terminal capacity expansion in the United Sates, this has led to clear pressures at the port to handle ever-increasing volumes of cargo (including quay storage).

The Evergreen-operated containership mv Ever Given physically blocked passage through the Suez Canal for six days in late March 2021, adding further congestion to an already global problem. Dozens of vessels bound for North European and Mediterranean ports were delayed for weeks, and 17 Asia-Europe and Asia to US East Coast services were diverted around the Cape of Good Hope. Nevertheless, having worked through these unexpected supply shocks, currently, berthing delays at major container ports such as Busan, Shanghai and Ningbo are between two and three days (although these have improved from an average of four to five days earlier in June/July 2021). Mostly however, the congestion on the western seaboard of the United Sates has been acute, resulting in overall delays to individual round trip voyages, and the cancellation of port calls. In early December 2021, there were about 40 containerships at anchor off LA/LB waiting for a berth, ranging from about 1,700 TEU to 14,000 TEU capacity. Depending on the individual operator and whether or not defined berth agreements were made with terminal operators, individual vessels may have been at anchor for up to 60 days, with an average of nearly 20 days. Due to changes in queueing systems in November 2021, an additional 56 ships were waiting up to 150 miles offshore. It should be noted that while some ports technically operate 24/7 (as in most Asian ports), and gates have been extended in LA/LB since the summer, market feedback suggests that the operating reality is very different and few improvements have been noted. 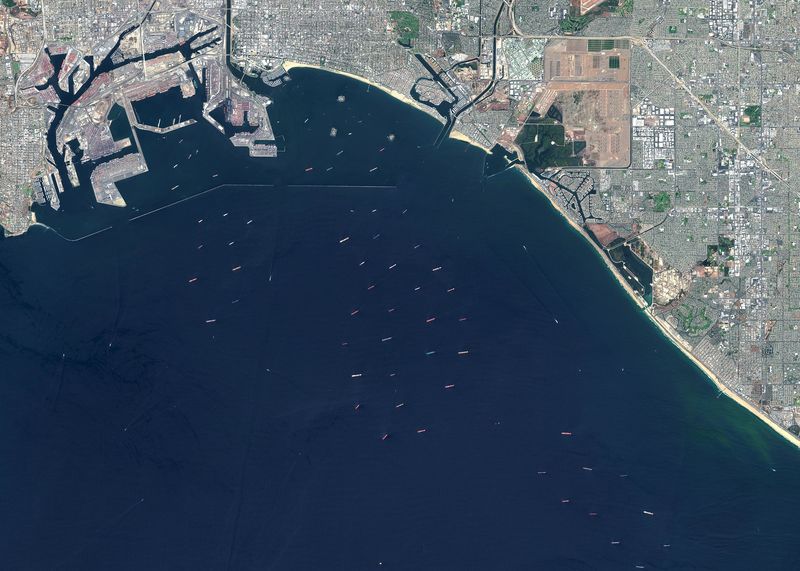 About 40% of import containers to LA/LB move inland to the Midwestern and Eastern states, and the nationwide chassis and railcar shortages have delayed the movement of cargo off the quay, and equally critically, disrupted empty equipment being returned for backhaul restitution to areas of demand in Asia. As a result of the pandemic, truck drivers have left the sector, resulting in a shortage. Moreover, certain pockets of sustained demand, such as in the foodstuffs segment, has exposed deficiencies in specialist refrigerated equipment. As vessels spent more time in port and congestion started to become more prevalent, the length of time taken for empty equipment to return to Asia increased; some vessels “cut and run” from individual ports and had no time to physically load empty equipment, and containers were often delayed inland.

How has the market reacted to or adapted to the supply chain problems?

Although dry bulk vessel operations have also been impacted at key ports during the pandemic, the port congestion and capacity constraints in the container sector in the face of sustained demand has led to exceptional growth in freight rates. This has, for the most part, strengthened the financial position of liner operators/owners, with further effects (mainly positive) reaching other sectors, notably MPP and dry bulk. The solutions to the supply chain problems are not readily apparent or implementable, and improvements envisaged by the US’ infrastructure bill are likely to take years to have the desired effects. The recent emergence of the Omicron variant highlights the uncertainty surrounding the COVID-19 pandemic’s evolution, governments’ reactions to it, and the wider implications on demand that underpin the sector’s current strength. Risks and volatility remain evident, and if historical cyclicality is anything to go by, it would be prudent to monitor the financial discipline exercised by the liner operators during this time of exceptionally high freight rates. In the meantime, the implications for cargo owners are obvious – make a plan B, and expect higher costs.

Click here to find out more about Infospectrum's services